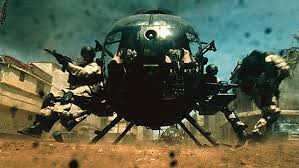 The incident in Mogadishu, Somalia, made famous by the book and movie, “Black Hawk Down,” changed my life.

It all began after high school when I visited an army recruiter. I asked, “What do you consider the toughest job in the army?”

“Being an Airborne Ranger,” was his quick reply.

I had two goals when I joined the army. One was to see how good my training was and the other was to test my faith in God. I knew the best way to accomplish these goals was to go to war.

In the 1989 invasion of Panama, Operation Just Cause, and later in Kuwait, Operation Desert Storm, I was shot at and placed in many dangerous situations. But I never thought I was in danger of losing my life.

This all changed in 1993 in Mogadishu, Somalia. The United Nations had been handing out food to the starving people in this East African country. There were several warlords in Somalia, and most of them had no problems with the U.N. One, Mohamed Farrah Aidid, saw the U.N. as a threat to his power. He began to ambush and kill U.N. workers. In one raid he killed and mutilated 24 Pakistanis.

The goal of my unit, Task Force Ranger, was to capture Aidid and bring his key men to justice for the death of those Pakistani workers.

Prior to our final mission on October 3rd and 4th, Task Force Ranger had conducted six successful operations. Everything had gone exactly as planned. But on that seventh mission, generally referred to as Black Hawk Down, things changed.

I was a 24 year old squad leader and placed my nine men in two Humvees. We led a ten vehicle ground convoy into the city. The job of the convoy was to retrieve the Rangers and Special Operations

Forces who had been dropped by helicopter onto the roof and in the surrounding alleys of the target building. We were to return them and their prisoners to our base.

The operation went exactly as planned with one exception: a Ranger, Todd Blackburn, in a Black Hawk helicopter, missed the slide rope and fell 70 feet to the ground. He hit his head first and our medics felt he would not survive unless he received immediate special medical care. As soon as I arrived at the target building, my commander called and told me to take Todd back to our base at the airport.

We loaded him into a Humvee and with my two vehicles around him we began to make our way back to the airfield. Mogadishu is about seven miles by two miles in size and one and a half million people had gathered there from all over Somalia to be fed.